Lier is one of Belgium’s undiscovered gems. It is a historic town on the river Nete where little seems to have changed since the 13th century, and makes for a history and culture lover’s dream. Not one, but two UNESCO sites can be found in this tiny place. From the impressive Belfry to the brilliant astronomical clock, Lier feels frozen in time.

I visited Lier on a drizzly July day, and the sun came and went. The cobblestones were slick and shiny, the ducks were out in force along the riverbanks, and the cafes had their heaters turned on (classic Belgian weather!).

I took a bite of the Liersvlaaike, a sweet, cinnamon-y, juicy cake. I was sitting in St. Gummarus Cafe, looking at my photos. Whilst wandering the streets and sitting for a beer is pleasant enough, there are plenty of great sights to check out.

Zimmer Tower and the Jubilee clock

The Zimmer Tower started life as a fortified watch tower called the Cornelius Tower in the 14th century, as part of the city’s fortifications. In 1930, astronomer and clockmaker Louis Zimmer saved the tower from demolition by adding his beautiful astronomical clock called the Jubliee Clock. In return, the tower was renamed the Zimmer Tower. On the inside, the Zimmer Tower is a museum.

It’s a masterful design – Albert Einstein himself congratulated Zimmer on his wonderful clock – and there’s a lot of information on display. There are 12 special instruments and timepieces arranged around a central clock face. The central clock tells the current time. And what about the smaller clocks? Lets try and decipher them (in clockwise order):

The Zimmer Tower overlooks a public square packed with chairs and tables, cafes and bars, the perfect place to enjoy a cold St Gummarus beer (yes, this is Belgium, and of course Lier has it’s own local beer!) on a sunny day. And don’t worry about losing track of time whilst at lunch (or the phase of the moon), because the Zimmer Tower is just next door!

Most people visit Lier to explore the béguinage, a wonderful walled mini-town-within-a-town built in 1258. Built to accomodate a community of religious women in Lier, such as widows and unmarried women, the 162 houses here are designed for a life of self-sufficiency. A woman living in the béguinage is called a béguine.

There are a number of churches and statues to visit here, and visitors are free to roam the lovely cobblestone streets and wander the alleyways, some of which are so narrow that two people can’t walk side by side. The site was classified a UNESCO World Heritage site in 1998, along with 12 other béguinages around the country.

The Lier stadhuis and Belfry

The Belfry is an elegant, slender clocktower, dating to 1369, and the second UNESCO World Heritage site in the city. The numbers 1369 are displayed on the side of the clock tower. For centuries, it stood all by itself. It wasn’t until the 18th century that the Baroque town hall building was built, attached to the Belfry.

The buildings were damaged at the beginning of the first world war, but miraculously survived.

The Belfry overlooks the triangular Grote Markt (big market). The surrounding buildings were not so lucky, however, and three quarters of them were destroyed in the war.

For a local speciality, try the Liers Vlaaike, a dense, moist, sticky cake; it is well spiced with cinnamon, cloves, nutmeg and coriander. Together with a coffee or hot chocomel, it’s perfect after a long day exploring the city on foot!

The Liers vlaaike even has a Protected Geographical Indication certification, which means that (just like champagne from the Champagne region, or roquefort cheese from Roquefort) the Liers vlaaike can only be authentic in Lier, and is protected from counterfeiting!

Sint Gummaruskerk is a 13th century church and Gothic tower, and one of the biggest and most beautiful buildings in the city. The church is filled with paintings by local painter Adriaen de Bie, and has stained glass windows depicting religious events.

The old city walls of the city are mostly gone now. The circular fortification which once ringed the city is now a 5km-long belt of green spaces, trees and walking paths that make for a nice way to enjoy the tranquility of Lier.

Lier has a train station, which connects easily to Brussels (about one hour) and Antwerp (15 minutes). It is easily reachable by car, like most of Belgium, although parking in the city centre can be very difficult.

Outside, raindrops started pattering against the window of the cafe. The weather had closed back in, so I ordered more coffee and another Liers vlaaike – perfect for a rainy Belgian day! 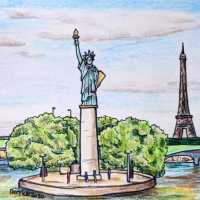