Our last stop in Mozambique was the capital, Maputo. The traffic was a long crawl, and we arrived in the middle of the hustle and bustle of Maputo mid-morning. We parked up near the central train station, a beautiful, classic building.

It was domed and spacious, painted green and white rumoured to be designed by Gustave Eiffel of Eiffel Tower fame (although, like many buildings around the world claiming to be Eiffel’s, this is not proven). Under a statue of a militant-looking woman holding a book and surrounded by snarling snakes, we looked at the map to find a lunch stop.

We walked down the main road, admiring street stalls along the way. We finally settled on a dingy diner with a dirty red-and-white tiled floor and a squeaky ceiling fan. We couldn’t read the Portugese menu, so we ordered hamburgers (trusting they would contain ‘normal’ ingredients).

What arrived on our tables was the worst hamburger that had ever been placed in front of me. The meat was some kind of lukewarm pink patty, served on a limp white hamburger bun, topped off with a runny fried egg. And that was it! No sauce, no onions, no cheese, no salads. It came with a side of soggy, greasy chips, and the meal looked sickening. After a few brave bites, we abandoned the burgers.

Our time in Maputo was short, and we were aiming to be in South Africa by the end of the day. In Maputo’s gorgeous acacia-lined backstreets, we discovered a fine art gallery, which had some impressive pieces in it, including old AK-47s remodelled into sculptures. Our last stop was a market near the centre of town, where we wanted to buy a Mozambique sticker.

We tried to convey our disgust when the shopkeeper told us what it was, but without any language skills to communicate with, she seemed unfazed at the concept of selling ivory. Back in the car after a few hours in the city, we pointed Hammond towards South Africa and started driving.

5 thoughts on “One (unusual) day in Maputo” 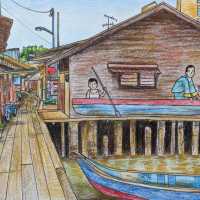